We had a cool find at the Eutaw site while doing some drone photography today (more on that later)! While walking the ca. 1760 mill tailrace, Jason came across this interesting ceramic, brought to the surface by tree roots and rain. It’s a tiny piece of a medallion from a Westerwald jug! 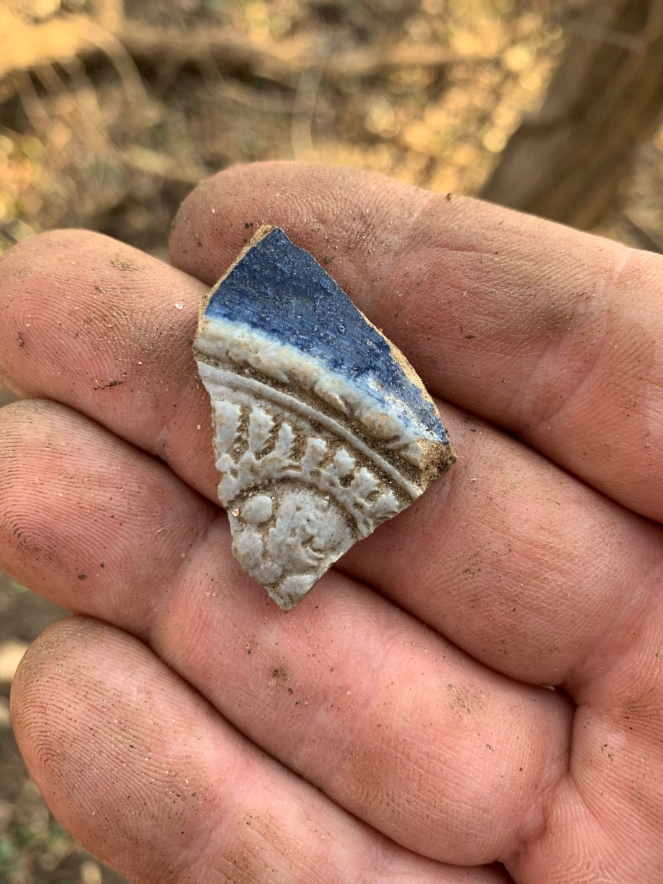 Terminology clarification: I’m using the word “Westerwald” to describe this blue & gray stoneware. It’s also known as Rhenish stoneware. “Rhenish” refers to a loosely-defined area of western Germany along the Rhine, where this kind of stoneware originated. It’s complicated, because the history of Germany is complicated; we can’t call it “German stoneware,” because Germany wasn’t Germany when this stuff was being produced.

Further complications: colonial-period Rhenish ceramics are salt-glazed stonewares that come in two major varieties: a speckled brownish type, and a blue & gray type, with a gray body and cobalt blue and/or manganese purple decoration. The majority of the blue & gray type was made in the Westerwald region of present-day Germany, so is called Westerwald to distinguish it from the brown variety.

Westerwald vessels sometimes featured an applied ornament or medallion at the center of an intricate design, and one popular motif was the the armorial or heraldic medallion. On vessels intended for export to England or its colonies in the late 17th and 18th centuries, royal initials were sometimes added. We think that’s what this little sherd was part of; based on the shape, size, & decoration, we think it was part of a jug commemorating King George I (1714-1727) or King George II (1727-1760), initialed “GR” for the Latin Georgius Rex (King George).

This piece most closely resembles a design that dates from the first half of the 18th century (early 1700s), which suggests the jug belonged to the earliest European occupants of the site, the Broad family.

It is difficult to assign a precise date to Westerwald vessels, since there were three sequential King Georges in England from 1714 to 1820, and the jugs were very popular in the British colonies…until British monarchs, and the tableware commemorating them, went out of fashion. 😉 But, since we know a lot about the occupants of the site, and were fortunate enough to find a piece of the medallion we can compare to fragments from other sites in Maryland, we’re pretty sure this is pre-1760.

For more on Rhenish/Westerwald Stonewares, visit the Rhenish Stoneware page at Diagnostic Artifacts in Maryland.

This site uses Akismet to reduce spam. Learn how your comment data is processed.